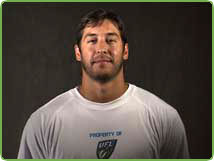 Last night I donned my JP Losman Buffalo Bills jersey (yes, I actually do have one thanks to my brother-in-law unloading it on me) in eager anticipation of the start of another football league. Certainly not expecting the same level of play as we see on Sundays, Mondays, Thursdays and the occasional Saturday in the NFL. However, the coaches of all four teams have quite recognizable names and many of the players do as well (to an avid NFL fan, I suppose).

As the game began, we were all excited to see if JP (a former player whom many Bills fans still root for, for some reason…) could have more success in this new “minor league” football league.

In short, I think the answer is no.

What we saw was the same JP. He gets spooked by the pass rush and leaves the pocket way too early (and quite chaotically) and he just missed throws. He was throwing high and/or behind for much of the night. He did throw two TD passes, and was an (on paper) mildly impressive 21-31 for 226 yards. But his receivers were definitely helping him out.

And what was the deal with everyone pronouncing his name “LOHS-min” (“los” like “close” as in, near by). Is he trying to get away from the “Loss”man baggage he acquired here? (Or, was it just minor league announcers? Although, it was fun that Doug Flutie, another former Bills fan favorite was doing the color commentary.)

In the end, thanks to sloppy play from the other team as well (dropped passes, poorly thrown balls, missed reads in the running game) the Las Vegas Locos (JP’s team) won 30-17. Not a bad debut. Catch the full recap from the AP here.

We’re still rooting for him… and glad for more football… but perhaps there is a reason that these guys aren’t playing in the NFL this year anywhere?

For more on the United Football League:
League Homepage: UFL-Football.com
Versus Coverage: versus.com