Today is actually Thursday, but since the Buffalo Bills play their weekend game tonight, my Football Friday post—a preview of the next game—will publish on a Thursday!

Hopefully the BILLS will not be as confused! Though, as I heard pointed out this week, the Thursday Night Games so far this season have been very sloppy, hard-to-watch football games. The short week of practice, and less time to recover from any injuries are probably two of the main factors contributing to a lesser version of NFL football.

Perhaps tonight the two young, up-and-coming franchises will break from that pattern?

There is actually a bunch to like from both of these teams coming off their last games. (OK, not the Bills game in New Jersey against the Jets. There’s hardly anything to like about that one!) But other than that game, the Browns have won two in a row after their quarterback change. Brian Hoyer is 2-0 as the starter, and even though their season starter, Brandon Weeden is healthy again, Hoyer will play in this next game against the Bills, too. 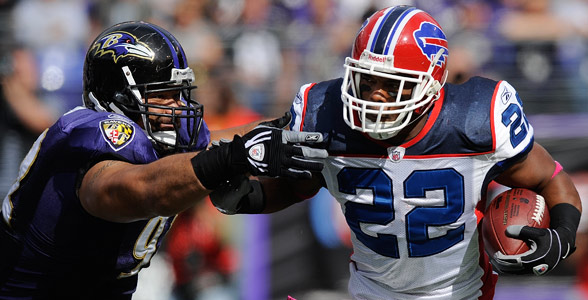 The Bills are fresh off their win at home against last year’s Super Bowl Champions, the Baltimore Ravens. Impressive! And more than just because of their title. The Ravens were #4 in the league in run defense, and the Bills ran for over 200 yards against them! The Bills defense had four sacks and five INTs on Super Bowl MVP, Joe Flacco. Very impressive!

And don’t forget their two games prior to the NY Jets debacle were a comeback win against a pretty good Carolina Panthers team (they beat the Giants 38-0 the week after losing to Buffalo) and leading the New England Patriots until the very last minute, when they took the lead on a late field goal.

Other than the game against the Jets, EJ Manuel has looked at least reliable, and even exciting. I’d say especially the game against Carolina—the long, comeback, last-minute drive for the go-ahead touchdown—but he also hit some throws last week for scores, including one that didn’t count (but should have!) near the end of the game. Also, Manuel has greatly limited any mistakes, and the Bills’ future does look promising with him at the helm!

INJURY UPDATE!
Bills FS Jairus Byrd—dead to many Bills fans, thanks to his non-chalant, flippant attitude in most (all?) interviews since signing with the team in the pre-season—fully participated in practice earlier this week. That’s a really good sign that he might indeed return … even as early as this week! Other Bills are greatly on the mend as well, including super-speedy rookie WR Marquise Goodwin, who will probably be back for the Bills’ next game, Sunday Oct. 13th, at home against the Bengals.

Let’s not forget what I highlighted last week: INJURIES ABOUND!

That hasn’t really changed, outside of the update directly above. But now, players like CJ Spiller can be added to the not-likely-to-be-seen-on-the-field-in-any-meaningful-way list. (If there isn’t such a list, there should be!) Fred Jackson is also hurt, but nearly guarantees he’ll be out there. Thirteen players are officially listed on the Week 5 injury report at BuffaloBills.com, and four of those are definitely out.

STATS DON’T LIE… USUALLY
Last week the Bills were able to overcome a top-notch run defense. Well, way more than “overcome”. They put up over 200 yards. So how about this week? Tonight, the Bills take on the #1 rush defense in the NFL, the Cleveland Browns. Can the Bills—perhaps minus their top two running backs, due to injuries—work similar magic this week? Not likely. The Browns defense is younger, faster, and crazier (in my opinion).

One strength the Browns possess that the Ravens do not necessarily is their “shut down” corner, Joe Hayden. He should effectively remove whichever receiver they put him on. (He shut down a pretty great receiver, AJ Green of the Bengals, last week.) The good news for the Bills is, they have many more than just one receiver!

Speaking of receivers, the Browns have a TE (Jordan Cameron) who has been somewhat dominant through the first quarter of the 2013 season. I believe he has five touchdown receptions now, including a game where he posted three? Those are Rob Gronkowski, Jimmy Graham, and Tony Gonzalez numbers. The Bills are faster this year, and prepared to cover guys (or attempt to) like Gronk … Cameron will be a good test of that.

So far, in my illustrious, two-part, Football Friday predictions I am an astounding… 0 for 2. 🙂 The game I thought the Bills would win, they lost. When I thought they were just too injury-depleted to compete, they won, and it seemed rather “easily”.

So… I’m a little afraid to proceed here, as a Bills fan, but …

With a defense that leads the NFL in interceptions, going up against a relative no-name QB in Brian Hoyer, a “vintage” RB, former Bill, Willis McGahee, and… who? at receiver? (Other than their TE, Cameron) …

AND, with an offense that, even injured, has a multiplicity of potent targets …

BUT, it is a road game, on national television…

Still, I must stick with my gut and say that, in a defensive struggle, the Bills will pull out the (much-needed) road victory:

The Bills will benefit greatly by beating a team that is similarly (but lesser) talented than they are, on the road, and picking up a conference win, against a team that their division rival, Miami, has already beaten. (Record against common opponents is a tie-breaker later on, should one be needed…)

We’ll see tonight if this team of youngsters is up to the task!

One reply on “[Football Friday] Wait… What Day Is It?”

I just realized … this photo is from the RED helmet days! Ha! 🙂 Still Freddy Jackson, though.