Now that New England has drawn RB Fred Taylor away from the Bills with only the promise of a potential championship ring… (Hmmmph!) the Bills continue to schedule visits with free agent players of interest. We mentioned a few of these guys on last night’s show, but if I were the GM, the list of free agents I’d like to sign would looks something like this:

It’s a pretty short list. I’m sure we’ll get totally different guys, and one of them might be useful. If we could even just get one of those guys on the list above… well, I’d be a happy Bills fan.

Perhaps you have already heard that BuffaloBills.com is accepting your nominations for the greatest Buffalo Bills players of all time. Position by position. You name your players for the 50th anniversary of the Buffalo Bills. Above are my picks for the offense. Some tough choices actually. (Notice that not many from this current team are in that line-up…)

Maybe we’ll even do an off-season show discussing who we think would make the all-time team from the first 50 seasons? We’ll see.

For now you can play along here. Pretty cool website the buffalobills.com boys have put together. Have fun voting! 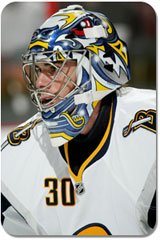 The Sabres seem to have plenty of bad luck in the injury department. Not just this season, but nearly every season. A few years ago, they made it to game seven of the conference finals, but most likely lost because they had one starting defenseman who was healthy! Many of the defensemen have missed time this season also. 2009 has been pretty much the same story, including the most recent injury to all-star goalie, Ryan Miller.

In Saturday’s victory over the Rangers, the Sabres lost Miller to a high ankle sprain. Those are bad. They usually place football players on the season-ending IR. They involve at least weeks of recovery, sometimes months. That’s bad. Miller is arguably the Sabres’ best player. And if some might give that title to Thomas Vanek, well, he’s gone too.

The Sabres’ best news this season has been the huge contribution from Tim Connolly, who it seems has been injured for more than two thirds of every season he’s been in the league! (Including this one.) He has become the star the Sabres hoped he would be since returning from his injuries this season.

Sabres.com posted an article about the injured Sabres, including an encouraging update: Thomas Vanek is skating again in practice. He was not expected back this early. Max Afinogenov and Andrew Peters are also currently recovering from injuries.

It’s definitely not good when you are clinging to eighth place in the conference – the final playoff spot – and you lose your top two players. The Sabres are likely thinking about making some trades before the trade deadline on March 4th. Maybe a veteran goalie, maybe another forward… who knows. While Connolly, Derek Roy, Jason Pominville, Drew Stafford, and a few others have had pretty good seasons, it’s hard to recover from losing your best two players. Perhaps a trade or two can give the Sabres what they need to make the playoffs, get their stars back, and make a run of it. Perhaps.

The playoffs are always more fun when your team is in it. We’ll see if the 2009 playoffs will be “fun”.

Perhaps next year, Marshawn Lynch will be invited for real. In 2008, serving as an injury replacement for Tennessee’s Chris Johnson, Lynch ended up leading all rushers in the game. Lynch had 48 yards on 6 carries (some were pure “Beast Mode”!) which tied Minnesota’s Adrian Peterson, who had 48 yards on 8 carries. Lynch wasn’t on the field very much, but almost every time he was, he made something happen.

His first appearance was a long run off the left side. Later on that drive, the AFC offense stalled on third down and short, with the RB unable to pick up the necessary yardage. Offensive Coordinator, Cam Cameron (of the Ravens) sent in Marshawn to pick up the yard, knowing that is what he is good at. The TV crew had him mic-ed, and we heard him say, “Marshawn better get this…” (Perhaps Lynch did a little begging to get in there?)

He did indeed, being stopped two yards short of the mark, he fought and fought until he had it. Beast Mode!

Lynch also had a run on a third down where he carried the pile of players – offense and defense – about six or seven yards for the first down.

It was great to see our Buffalo Bills represented well – in play, if not in number – in this year’s Pro Bowl. Hope to see many more there in the years to come!