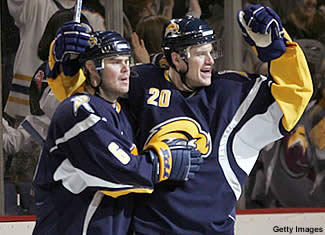 We have had some good teams here in Buffalo, but we’re not used to having the best team. Just watched the Sabres (via TiVo) beat the second place team in the Eastern Conference (the New Jersey Devils) 4-3, with the third NJ goal scored with 1 second left. The Sabres looked talented, confident, cool and collected, and … just great.

They’re deep, too. At least three lines that are fantastic. All can score, and do! And we have a couple more players coming back from injuries in the next couple weeks! Heading into the playoffs, the Sabes will defintely be one of the – or THE – favorites to win it all.

How awesome would that be! NHL Champs – BUFFALO SABRES. Incredible.

Stay tuned… the regular season ends April 8th, and that’s when things get really interesting! I can’t remember Buffalo having a 1st place seed since I have been a fan. I hope that doesn’t make them complacent. I don’t think it will. They know this is their year to win the cup… and I really think they’re going to do it!

I found a couple good articles tonight on the Sabres. Click below to read.

Sabres Prove to Be Class of the East [source: nhl.com]
Ultimate Standings: Buffalo Sabres are No. 1! [source: ESPN]

Two posts in one day! Wow! Though, this one is more of a “flash back”…

When the Takeo talk ramped up recently, culminating in his trade to Philadelphia, I was reminded of an article I had posted here sometime mid-way through last season. I just pondered whether the Bills might consider trading him, while they could still get some value from him. Turns out I was right, and the Bills did deal Spikes.

As I was doing some “house keeping” on the ol’ blog here today, I went to check out that article, and it was interesting reading the comments from Bills fans then. Most people thought me to be quite insane to even suggest such a thing. But is that still the case? If you’ve the interest, or the time, take a look at my article from October 16th, 2006 (link disabled) and consider what the Bills ended up getting for him (and giving up? Holcomb was part of the deal, too!). Comments are certainly welcome.

I do believe it was a good move by the Bills, for the team. I am still a Takeo fan, and will be rooting him on (as well as Kelly Holcomb) in the City of Brotherly Love (though I am definitely not a big fan of the Eagles…)

Enjoy the blast from the past… but I can’t wait for the draft… and BUFFALO BILLS FOOTBALL! 🙂

I have been slightly amused lately hearing all of the “experts” (and I do use that term loosely) proclaiming that Buffalo is one of (if not THE) biggest losers in this year’s free agency so far. They throw out the big names of the players who have moved on, whether by their choice or the Bills’ decision makers. McGahee, Clements, Fletcher, Spikes, and the list goes on. And perhaps there is some merit to the claim that we have not “done well” in free agency… but maybe the Bills aren’t playing that game.

I don’t pretend to know what goes on in that well-aged head of our General Manager, but I gotta think he’s got a plan. Obviously we have all seen that part of the plan is to pretty much refresh the entire team, as there was a good deal of player turnover last season, and there will be again this season. But what else is going on up there, Marv?

I was thinking recently about how Marv came to the Bills in mid-1986, and the Bills didn’t win a division until 1988. So, it took Marv just a season and a half to get to the division crown. Even got to the AFC championship in 1988. Not bad.

For kicks today I did a little Buffalo Bills draft research. Now I skipped ahead past the “Bickering Bills” of 1989, and just focused on their 1990 roster… the one that got us to our first Super Bowl. On our Super Bowl roster were 23 players that we drafted, and only 8 of those were “pre-Marv”. Now, obviously, Marv had a different role then, but check out our current roster. The current roster holds 24 players drafted by the Bills, and 14 of those are “pre-Marv”. So, in one year, Marv has added 10 players to the roster that he drafted. (Yes… I cheated. Peerless Price was drafted by the Bills in 1999, but Marv brought him back, so…) 🙂

What it seems like from my vantage point is that Marv likes to build a team from the ground up. Just as Shaw said on his blog earlier, football teams full of flashy guys do not always produce the championship teams. We were spoiled in the 1990s in this town by having a team that was very team-oriented, and yet filled with super stars. And most of those we had acquired through the draft.

Do you seasoned Bills fans recall the reaction to Marv’s drafts in those days? I was a new football fan, but I knew enough that we “should” be drafting the best guys from college. I remember wanting us to draft Raghib Ishmail (I forget how to spell his name though…) and other big name guys. “Who ARE these guys???” I would ask when I saw names like Phil Hansen and Don Beebe and other guys from small schools like… Kutztown State? (Andre Reed’s alma mater). Marv has a history of building a team of “unknowns”.

Go back to the previous article I posted… about the similarities (perhaps) between the Bills and the Sabres. The Sabres came out of relative anonymity to be the top team in the NHL right now – mostly with up-and-coming young stars, not seasoned veterans. Perhaps the Bills are doing the same as they trim away at the older (more recognizeable) names on the roster, and invest in players who might be the next set of recognizeable names. Who knows if in the next couple years, folks might know the names Losman, Evans, Whitner, Ellison, Youboty, etc, just the same as Spikes, Fletcher, Clements, McGahee, Moulds, et. al.

The Bills definitely seem to be putting a lot more faith in the next generation of players than going out and hiring the “current” generation via free agency. I’m pretty sure we’ll nab some gems in the 2007 draft as well, given Marv’s track record.

Is that way of building a team still possible? Marv and Co. did a great job last year – every player we drafted made the team, and most made contributions. Can he do it again? Will we find players in the draft who can take us back to the playoffs… to winning our division… to dare I say it… THE SUPER BOWL?

It’s impossible to know for sure, but I do know Marv has a plan. Free agency seems to keep you from building a team slowly through the draft, because any good players you land in the draft are gone in 5 years. It’s almost like college football with the possible turnover from all your players graduating after 4 or 5 years. I don’t think that’s the best thing for football fans or teams, but it might be good for the players. And somehow… other teams are still winning the Super Bowl… so it can be done! 🙂

I think we’ll probably be shocked again by Marv’s Draft Day shennanigans. Everyone will be aghast at the horribly unknown players filling up our draft roster. But Marv did OK last season, and I suspect he will again this year.

We’re building a team here, and I really do look forward to watching the “experts” eat crow later in the 2007 season as the “surprising” Buffalo Bills are in playoff contention, and maybe even in contention for the AFC East crown? I don’t think we’re ready to win it all, but this team is going to do a lot better than “the experts” are seeing.

At least, that’s my expert opinion. 🙂

I’ve never seen the Colbert Report, but I came across this video on the web today and with the tournament getting started today… thought it was worth posting here. It’s hilarious! Not sure you can bank on these picks, but it’s worth the watch. 🙂

“If he can carry someone in the sand, he can lift someone up for the dunk…” 🙂

How about THAT start to the free agency period?!?! Three big OL studs (well, at least two, with one “utility player” to boot)! A serious commitment to the OL to go along with the great young guys we brought in last season. Things are DEFINITELY looking up for our Bills in 2007!

Well, at the moment, the focus in our house is on THE BUFFALO SABRES! OH MAN are they playing great! They’re incredible! Can’t wait for the playoffs!!!

So, today I posted an article at the BBR @ BuffaloBills.com page titled, “Are The Bills Following in the Sabres’ Footsteps?“. Worth a read… click over and check it out.

Looking forward to some more (probably smaller, outside of a Takeo or Willis trade) moves in the remainder of the FA period… and then the big Draft weekend. Marv should be able to put together another fantastic draft this year. THIS YEAR I am just going to trust that Marv knows what he’s doing, even if it don’t look like it!!! 🙂

Hope you’re enjoying the off-season, and if you don’t already know… just visit the Bills site daily (or, if you’re tech-savvy, get their RSS feeds to better stay on top of stuff) and you’ll know all the goings on at One Bills Drive. Chris Brown really does a great job of keeping us informed. His blog is excellent.

More to come… for now, check out BBR @ BuffaloBills.com!

For those of you who may find an article about the Bills and/or Sabres interesting, or worth the read… I finally posted something to my BuffaloBills.com blog for the first time since the Bills’ season ended! 🙂 It’s called Are The Bills Following in the Sabres’ Footsteps? … and… well… that’s what it’s about. 🙂

Just thought I’d let you know. If you know what RSS is, here’s the feed for the blog I keep there.