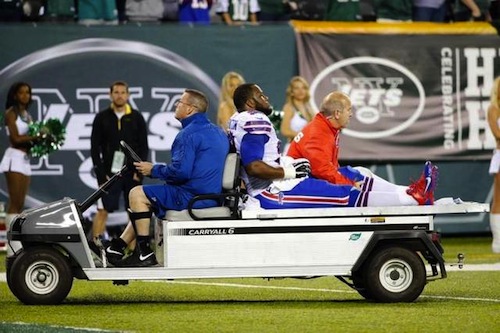 And somehow, it’s always rougher to the Buffalo Bills!

I remember just a few years ago when there were seventeen (or more?) players on the season-ending Injured Reserve (IR) list! That’s a third of an NFL roster! Yikes!

This year is starting off no better. Look at this injury report from Thursday afternoon: 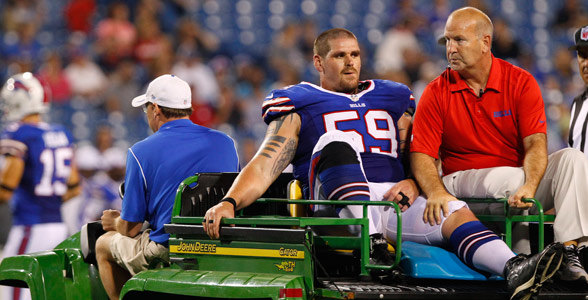 I put an asterisk next to each of the guys who are starters. And the other guys are players who would be in there for many snaps.

Clash WITH the Titans 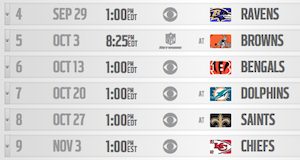 As if the injuries weren’t enough by themselves… have you seen the Bills’ schedule?

Currently they are at 1-2 (which could easily be 0-3!) and they are about to take on six teams in a row whose combined record is an astounding 15-3… and that’s because Cleveland is in there! (And they beat a reasonably-tough Minnesota Vikings team last weekend, after nearly defeating Baltimore the week prior!)

The next two games after that are at Pittsburgh (no easy task, even if they do have a losing record this year) and home again to face the New York Jets. That did not go so well the first time …

Even with all of those players on the injury list above, those games would be tough. But without them?

Buckle up, Bills fans. This could get bumpy! 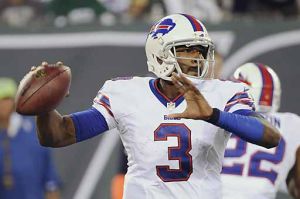 One week, you’re the savior of the world, next week… not so much.

EJ Manuel has fallen from grace with many Bills fans, rightly wearied by thirteen seasons of quarterbacking woes. (OK, not really. There was still a little Flutie in there (ha! “little”) and Bledsoe had that one good year…

Last week EJ was sacked EIGHT times, and for some strange reason he kept throwing balls 5 or 6 yards out of bounds? (EJ, that’s a good way to avoid INTs, but you also avoid the completions.) He looked skittish, scared, scurried, and all things of that sort. To be fair, the offensive line and the run game sort of set him up to feel (and act) that way. The blame can not all be placed on the quarterback.

That said, last Sunday, it was pretty obvious that he is a rookie.

He’s looked good at The Ralph. That’s where they play this Sunday. Against the Super Bowl Champion, Baltimore Ravens. Who still have a good defense. (Minus Ray Lewis, Ed Reed, and … somebody else.)

Will EJ Manuel still look like he’s on fire in week four? OR, will be be “on fire”, besting his yards, touchdowns, and any other marks he’s set so far in his fledgling career?

This week, I shall be more conservative. And honestly, I hope that I am wrong two weeks in a row.

The Ravens are also coming into Orchard Park injured, but they still have their highly-paid quarterback. I have a hard time believing that our fourth-string and on down the depth chart cornerbacks (and backup safety, I might add) will be able to stop Joe Flacco and whomever he chooses to throw to.

Toss in the (incredibly) porous Bills run defense facing the likely return of Ray Rice, and…

Baltimore should win this one somewhat easily.

I think one thing we will find out this week in Buffalo is the skill, talent, and ability of the rookie coaches (as well as the rookie quarterback). Doug Marrone and Nathaniel Hackett will need to free up CJ Spiller and EJ Manuel somehow, while Mike Pettine will have to figure out a way to run his crazy (and good) defensive scheme with fourth-stringers! I do hope they can get it done. We’re about to find out!

[…] not forget what I highlighted last week: INJURIES […]