It’s Friday, and that means another weekend of football is here! A week ago, Alex and I attended a high school football game here in our town. First time ever, actually! It was fun… except for the constant rain, on a cold night, and the college-ready, MJD-bodied running back on the other team… Still, it really was quite fun! We look forward to doing it again soon.

But, as you are likely well aware, this is a Buffalo Bills household. High school football is fun—I enjoyed playing for my high school several decades ago—and every once in a while we’ll tune in a Michigan State football game (and on rare occasions, a different college game) … BUT…

It’s pretty much Buffalo Bills, and NFL football around here.

(Oh, and for the next couple weeks, our football weekends culminate with our own Monday Night (flag) Football games! Those are great fun, too!)

So this week, the very promising, young Bills get to play their first game away from The Ralph.

In two games at home, they have performed admirable, and at times, messily. Penalties, turnovers, dropped passes, missed passes, and in Week One, a CJ Spiller who forgot he was good. That has led to a 1-1 record, thanks to EJ Manuel and company pulling it together on the final drive. And also, thanks to a defense that looks… impressive. Even missing two of its best players: CB Stephon Gilmore and FS Jairus Byrd.

Will that continue on the road? How much does the raucous crowd in Orchard Park aid this team? Can this young team with a rookie QB, and a rookie Head Coach, have the same—or better—success on the road???

We’re about to find out!

The Jets are favored by 2.5 points. That actually means that Vegas thinks the Bills will win the game. (Home teams are given at least three points, just for hosting the game.) The line makes sense, based on their records through the first two weeks: both teams at 1-1, both wins being last minute, come from behind wins. (The Bills loss to the Patriots was much closer than the Jets loss to the same team, though, as the Jets were never really in that game, despite the appearance on the score board.)

Such a tough game to figure out. It would seem that the Bills have the edge in talent, and they have performed overall much better than their division counterparts. But both teams are young. The Jets have an established, veteran (mostly respected) head coach… but the Bills have the Jets’ former Defensive Coordinator! Ha!

Really, should be an interesting matchup. Can’t wait to see it! 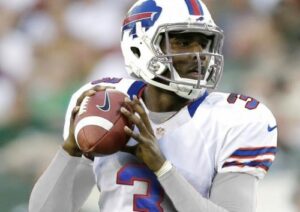 I really think the Bills defense is improved. Six sacks last week. The backup corner backs are playing MUCH better than anticipated. Rookie LB Kiko Alonso was overshadowed last week by fellow rookie, EJ Manuel’s last minute drive to win the game. (And Stevie Johnson FINALLY catching the big pass!) Alonso is pretty great so far, actually. He ended the game by sacking Cam Newton, when they still had a (very small) chance to win that game. He also had an interception early in the game.

Look for Mike Pettine’s defense to continue improving, and confuse Jets QB Geno Smith, and shut down whomever else they have on their offense. (Who do they have?)

And on offense … with a steady young, unflappable QB, a really talented group of wide receivers, and um… CJ Spiller and Fred Jackson? If they don’t hurt themselves with penalties and turnovers, this should be a comfortable win for the Buffalo Bills.

The Bills, if they really are improved, and “heading the the right direction”—as most Bills fans think they are—really need to win this game. It’s against a division opponent, that has befuddled and annoyed them for years.

This Sunday we could start to see that turning around.