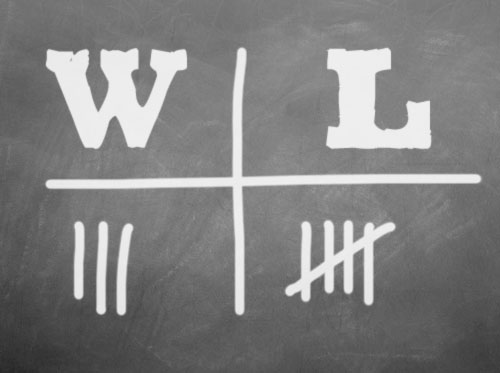 Are you a sports fan? Do you enjoy participating in competition, or just watching other compete? There is often tension, drama, emotional highs and lows, and plenty of excitement. And in the end, there is a winner, and a loser. (Unless a draw is an option for the final outcome in the particular sport of choice.)

The outcome is usually the way we judge a game. Did you win? You were the best team out there! Did you lose? Tough break. They were better. If it’s a league, where you’re tracking your wins and losses, chalk one up in the loser column for you and your team.

I’ve always thought this was such a strange way to judge effort, ability, and even the result of a particular contest. First, there are so many things that go into a win or a loss, and often a couple bounces or calls that were a hair’s breadth from going the opposite way may have determined that final outcome. So did the better team win? Or, were they just lucky?

Honestly, it’s often a toss up—and can even be well argued that the better team ended with fewer points.

And yet, we even champion the phrase, “Winning is all that matters!”

Bottom line is, that’s true. The way we have set things up is based on wins and losses. The ultimate champion in any sports league—the best team—is the one who outlasts all the others by winning. It doesn’t matter if it’s ugly, if the other team was better, or if they win by dominating their opponent—just win.

You don’t even have to win all of your games! The NY Giants won the Super Bowl a few years ago, after “sneaking” into the playoffs. In what might have been considered a sub-par season (9-7 overall, they were 7-7 after week 15!) they beat the New England Patriots (whom many considered a far superior team, for many reasons) … and THEY are the Champions.

Just because they won the right games, at the right times.

It’s funny to me, actually; how much emphasis we place on the final outcome. I don’t have an alternative, though. What else could you base it on? Everything else is simply subjective, based on opinion more than a measurable actuality. But still, there’s so much “luck” involved, and we base so much value, or “worth” on these ‘W’s and ‘L’s.

I think I may be more understanding of this as a fan of the Buffalo Bills. Did you know that this NFL franchise has not collected enough wins in any of the past thirteen seasons to advance to the post season playoffs? Thirteen! They have a record of 82-126 over that span of years. A win percentage of thirty-nine percent. That’s really incredible. I’ve watched most of those individual contests, and while it’s not really fair to say they “should” have won any of those games that they lost, there certainly were dozens that could have been flipped to wins by just one or two timely plays going the other way (and those plays being just a bad bounce, or a fraction of an inch from doing just that!)

And so, our team and its fans continue to be the butt of many a football joke. Just because of a few plays.

Overall, this usually is a good measurement. Those teams were not very good. But they weren’t maybe as bad as the W/L record would suggest. Nor are the winners necessarily as “good” as their record suggested. And yet, they are lauded as the best.

This is not a sour grapes post. 🙂 Yesterday my Bills won on a last second touchdown, in a hard-fought, back-and-forth game where either team could have won—and maybe the Carolina Panthers “deserved” the win even more. (Or at least, as much as the Bills.)

But the Bills won. They are 1-1. They feel better about themselves. Just because they finished with one more point. (Thanks to a penalty, and a few other beneficial moments.)

In the previous week, the Bills may have actually been the “better” team, but they lost. There were dropped passes, bad calls, penalties (which were correctly called) and in the end, the Bills lost on a last minute field goal.

I still say, wins and losses are a funny way to gauge the overall worth or ability of a team.

I guess that’s just a strange part of “sport”. In the end, winning is probably not all that matters. At least, not to me. Playing hard, good sportsmanship (whether winning or losing), competition, dealing with adversity, and just the enjoyment of physical activity and exertion… leaving everything on the field, as they say—all of these are great parts of sport, win or lose.

A famous quote, attributed to Thomas Edison, reminds us that winning and losing may not be the best measurement of any particular outcome:

I have not failed. I’ve just found 10,000 ways that will not work.[1. Note: This quote is interesting. I found several versions of it, usually differing on the number of failures (700, 1,000, and 10,000 being most common). But also the subject of the failure differed at times (battery storage vs. the carbon filament for light bulbs) and also there was some stated doubt regarding the attribution to Edison at all! Interesting.]

So I contend that whether your final result is a win or a loss, the ‘W’ or ‘L’ does not determine the worth of you, or your team, or even your effort on that occasion. People say there are “moral victories” (meaning you can take something good from a loss) and then others strongly object, saying there are NO moral victories. Wins are all that matters. That’s just silly … it’s a GAME! So many things go into it, and the final result can go either way. That’s what makes it fun!

Enjoy the competition. Play hard, win or lose. And even enjoy watching and cheering for your team, win or lose.

We Bills fans certainly know how to do the latter! 🙂

2 replies on “Winning Is All That Matters!”

Loved your post on the Bills. In the NW we cheer for the Seahawks. Do you know what offensive record the Seahawks hold that will never be broken? It is yards in a game. The answer is 7. And yes, that was during the Steve Largent era, not their inaugural season. I think he caught passes for over 60 yards in that game but the rest of the team……

At least your Bills went to the Super Bowl 4 times and had a really cool quarterback leading them. Best wishes for this year. Things are looking up for us even if our coach is from the University of Spoiled Children……

See you in the Super Bowl?

Thanks, Mark. Were you referring to this post, or a previous one? Either way, thanks.

Wow. I did not know that 7 yards stat. That’s pretty incredible! Fairly Madden-like. And pretty on par with the levels of mediocrity, no… ineptitude that we know all too well as Bills fans!

But the future does seem to be quite bright for our favorite franchises!

Marcell Dareus gave your QB some props this week in an interview he did on the John Murphy Show. He was asked about Cam Newton, and how it might be difficult to cover him, and in part of his response he said something like, “Now Russell Wilson, man! That is a guy I hope I never have to play again!” Wilson ranks (much) higher, apparently, on the Dareus Chart of Dangrous QBs! 🙂