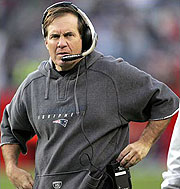 I’m a little late to the party here, but I wanted to get some of my thoughts on the “cheating” scandal(s) that surround the New England Patriots.

News has surfaced that the Patriots may have video taped the St. Louis Rams’ walk-through practice the day before the Super Bowl in 2002. That was the one where the Pats managed to somehow upset the heavily favored Rams. The Rams offense was just sensational that season, and somehow, the Pats had the answer – enough to have a 14-3 halftime lead! It ended with the Pats kicking a FG to win it, and stun the world. Of course, then they went on to win two Super Bowls in the next three seasons.

But all this talk – and hard evidence – of the Patriots finding unethical, against-the-rules ways to get these wins, made me notice a couple things.

First, the Pats were 11-5 in that first Super Bowl season, finishing 14-5 with the stunning Super Bowl victory. Then, for some reason, they didn’t even make the playoffs the next year. They finished 9-7, in a three-way tie with the Jets and Dolphins. (Poor Bills…) 🙁 By a tie-breaker, they were excluded from the playoffs.

Perhaps they were trying to do it “by the book”? Well, that didn’t work.

So here are the following seasons’ results. (I’ll include those first two as well.)

Not sure yet. There is talk that a more thorough investigation could be coming. One run by the US and various state governments.

What will the NFL and the Patriots do then? The games have been played. Is an asterisk enough? Can they take the Lombardi Trophies away from the Pats? Can they give them to their unethically-beaten opponents? Do they want them? Then they would have a championship with an asterisk.

Not sure if fines, suspensions, or even jail time will befall the New England Patriots, but it could get pretty ugly over this off-season.

The last minute blemish to their perfect season (and the shenanigans that followed by Belichick, Brady, and Moss) might be only the very start of a long, dark off-season for the Patriots.