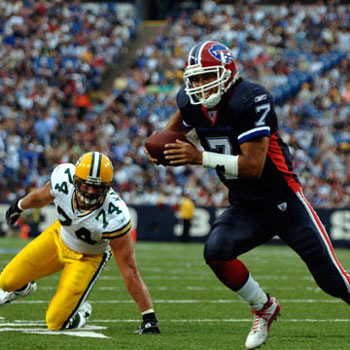 Bills QB JP Losman on his way to the endzone

Yes, it was a preseason match, so the victory must be taken with a grain of salt. Yes Brett Favre did look completely invincible against a very tough Buffalo first-string defense. Yes, McGahee was not his full-steam-ahead self.

We attended the pre-season demolishing of the Green Bay Packers at “The Ralph” (as the stadium has been affectionately dubbed) in Orchard Park, NY this past Saturday. It was noteable for a few reasons. First, it was our first chance to catch a game from our VERY OWN season ticket seats! We split the games this year with our bro-in-law, and so will be in attendance for 5 of 10 games! Nice!!! And, second, being Kids’ Day, it was a chance to bring our two boys and our 7 year old nephew to the game at a reasonable price!

When we arrived, the skies were overcast, so we came prepared with trash bags turned rain coats. It turned out we did not need them, but you can never be too prepared… 🙂

We picked up the extra tickets for the boys at the ticket office and hoped we could find 5 seats in a row so we didn’t have to sit in different locations. Upon arriving at our season ticket location, we found a row of exactly 5 seats where our two are! So, we sat down and enjoyed the game! I kept watching people to see if we were in their seats… but no one came along.

Until about half way through the first quarter. 🙂

We discovered we were in Section 240 instead of 241! 🙂 We lost our seats, and became nomadic football fans, hoping to score another row of empty seats. (And, surprisingly for a pre-season game, those were sorta hard to come by!) We headed to our real seats to at least meet our “neighbors”… and found …

So, we got to enjoy the game with the boys who took everything in with great excitement. We saw great runs and throws from our new QB, JP Losman. He ran for a touchdown. We saw a couple more runs for touchdowns. There was a 54 yd field goal. Some great returns of punts and kicks. Just a great game to see in person!

We even witnessed one of the best quarter backs to ever play football. He only played 5 or 6 downs… but he was great. Farve drove the team fairly easily against our great defense, and even when they HAD him, he got away somehow and tossed a perfect pass to a covered running back in the endzone. Amazing. And the play came right toward our corner of the stadium, so we had a great view. 🙂

Our next game (that we’ll attend) is Sun Sept 25 against Atlanta. That will be fun to see Michael Vick in person too. And that game will count. So it will be even more fun to see the Bills trounce another weak opponent! 🙂

The next game on the Bills schedule is Friday in Chicago. Preseason, yes… but hey… it’s still…