One Small Step Toward a Mars Landing … at Sea 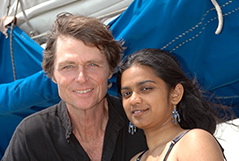 Reid Stowe is a “professional adventurer” (what exactly is that?) who is 100 days into a 1000 day stay on a small boat in the middle of the South Atlantic Ocean. His goal is to help NASA prepare for what it will be like to have a very small group of people on a small vessel for close to three years. Interesting research project. He also has a website aptly named 1000 Days At Sea.

How Mark Zuckerberg Turned Facebook Into the Web’s Hottest Platform

With my recent delve into the world of Facebook (finding and reconnecting with friends whom I have not had any contact with for over 20 years!) I noticed this headline, and found the article quite interesting. I had heard earlier that Zuckerberg, founder of Facebook, had refused a $1 Billion purchase offer, but did not know the rest. Including the estimate that Facebook is now worth at least $5 Billion. Good job, Mark.

This is the best article, at least regarding the substance of its content. As you likely know, Buffalo Bills TE Kevin Everett suffered a life-threatening spinal injury on Sunday during the Bills/Broncos game. We were there. It was awful. Even worse was the report from the doctor who performed surgery the next day. (Watch Monday’s press conference at BuffaloBills.com.) But last night, reports began surfacing that Everett was able to move his arms and legs, and doctors are actually optimistic that he will walk out of the hospital. That’s just insane!

I would suggest guarded excitement as I am having trouble corroborating this story. There are no updates on BuffaloBills.com, which is extremely suspicious. I’ll keep digging, but the linked article above does seem quite hopeful, and credits a few trustworthy sources. We shall see. From what I heard on Monday, even Kevin’s survival is a “minor miracle”.