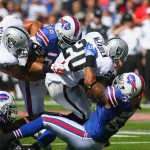 It’s football season, and this year’s campaign is no different than any other. Each team is going to be taking it one game at a time, giving 110%, and leaving it all on the field, hoping to come away with a victory.

When the game begins, when the chips are down, if you’ve put in your time in the film room, studied your opponents tendencies so you know what they’re going to throw at you, and you’ve got your game face on, even though the outcome is always up in the air, chances are you’ll have the upper hand. Plus, if you’re playing in your own back yard, you’ll have the aid of the 12th man!

Once the game is underway, you’ll have to keep your head in the game. Stick to your gameplan. Your best defense is a good offense. Let your backs pound the rock, or your QB air it out, and get a jump on your opponent by getting on the board early. Then get ready for the ensuing kickoff.

On the other side of the ball, you’ll need to just pin your ears back, step up, and play a full sixty minutes. Make sure you cash in on your takeaways, and whenever possible flip the field on special teams. You have to win in all three phases of the game.

At the end of the day, when the final whistle blows, the better team always wins the game.

And that’s why we love this game.

Note: I didn’t “scratch the surface” of the breadth of terms employed by football players, coaches, and especially media personnel “week in and week out” in the world of NFL football. So, if you have some to add, “throw your hat in the ring” in the comments below. (What does that really mean, anyway?)