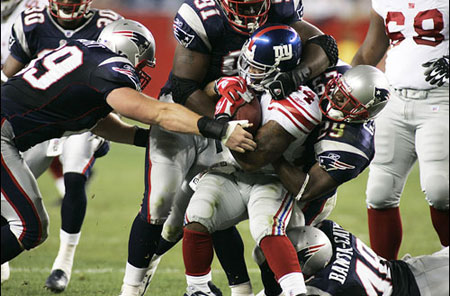 In a somewhat surprising move, the NFL decided to allow CBS and NBC to simulcast the Patriots vs Giants game that was scheduled to be broadcast on the NFL Network this Saturday night. The NFL is not known for its generosity, but the NFL Network is in such a small percentage of homes, and this game is of pretty significant (sports-world) historical significance, so it will be shown on all three networks.

New England coach Bill Belichick said, “It’ll be like the State of the Union, on every channel.”

If you’d like to read more, check out this article.

The Giants don’t stand a chance, but I would laugh for DAYS if they managed to defeat the undefeated Pats. They are the least likeable “great” team I have ever seen in my couple decades of sports fandom. They are arrogant, obnoxious, self-absorbed, and really just a bunch of jerks. Very hard to root for them. It’s hard enough to just stomach them at all.

That said, the Giants don’t stand a chance.

But, not many more people can watch the annihilation of yet another 2007 NFL team. And the unsportsmanlike taunting and gloating of another.

One reply on “State Of The Union?”

OK, I must say I was wrong! I was impressed by the way the Giants – playing their game – were able to really make a game of it with the Patriots. A little sad that they couldn’t pull it off.

It’s so interesting how a team doesn’t really need superstars, just good matchups. The Giants defense matched up well against the Pats offense – mostly. And somehow the Giants offense looked better than they ever have tonight. Ever.

Glad it was a game. Really didn’t want to see the steam roll.