You really never know right away how well a team fared with their draft selections. There are some who love every pick, some who love a few, and of course, many who hate everything about the picks. And all this despite the fact that you rarely know how a draft actually pans out for at least two or three years. It never matters, we all feel the need to “grade” or in some way rate the picks of our favorite teams.

Apparently, I am no different. 🙂

I was never on the “draft-a-QB” bandwagon. So that was not a disappointment to me, as it seems to be to some Bills fans. (Even though we DID draft a quarterback in round seven… that was not the guy most anyone wanted us to draft.) I was a bit surprised—though I should not have been—that they passed up some of the lineman that seemed like great choices, and were available at spots where they were selecting. 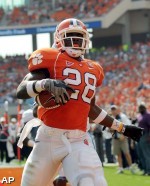 Spiller, a running back, was a surprise to some, since the Bills have two better-than-average RBs already, but first, coach Chan Gailey has already said they wanted to add a third RB, and second, this guy is exactly what they were looking for. More of a “home run hitter” so to speak. He’s been compared to Reggie Bush and Chris Johnson. He compares himself to Warrick Dunn. And from the sounds of things, this guy will at the very least be exciting. His numbers are impressive (the only comparable player in the NCAA record books is Reggie Bush. That’s good company.

The first pick was not what many were expecting, but I think Spiller will be what the Bills were looking for: a TD scorer.

(I also think it may spell the end of Roscoe Parrish’s Buffalo Bills career… Spiller is also a kick returner with a record-tying 8 return TDs in his college career.)

The next two picks are not the DLs that most expected the Bills to draft, but both are rated fairly highly by scouts. They both also have experience and the skill set to fit into the new 3-4 defense that the Bills will be running in 2010. That was clearly a big consideration in drafting Troup and Carrington.

Marcus Easley is another tall, fast receiver. James Hardy was drafter a couple years ago. This offseason we signed free agent Chad Jackson from the Denver Broncos, another tall receiver. And of course there’s Steve Johnson who has shown some promise in the limited action he’s seen.

With Owens and Reed (and even Justin Jenkins) all allowed to go on their way this off season, that leaves the Bills with a rather inexperienced (though quite tall) team of receivers. After Lee Evans—whom some would call and “all pro”—the Bills have (in order of experience): Roscoe Parrish (5’9″), Chad Jackson (6’1″), Steve Johnson (6’2″), James Hardy (6’5″), and Felton Huggins (6’2”). That’s a fairly tall receiving corp. Aside from Parrish, whom I still feel is going to be expendable, with the addition of Spiller.

The Bills finally addressed their offensive line needs by drafting Ed Wang to fill the LT position. They are rather thin at that spot with Demetrius Bell being the “incumbent”. Wang is a big dude, with good “feet” (according to Bills’ GM, Buddy Nix) and should compete for the starting LT spot.

Moats and Batten are a couple more 3-4 defense guys, whom the Bills have been seeking out in their transition to the new defense. They are listed in some places as LBs, and in some places as DEs, so I’m not sure exactly what role they Bills drafted them for, but it was definitely for the 3-4 defense. And, apparently, special teams. (Check out this glowing review of the Bills draft from the NFL Network guys.)

Finally, in the seventh round, the Bills drafted their quarterback. There were some rumors that the Bills were trying desperately to trade up to get Tim Tebow in the first round, as the Denver Broncos did. However, the Bills deny this, and as was apparent from their passing up of both Jimmy Clausen and Colt McCoy, they really had their sights set on Levi Brown, their eventual 7th round pick.

Brown was the top player in his conference last season, and definitely comes from a winning program, which is something that has been lacking in recent QB selections by the team. But, it’s fairly rare to find a starting QB in the final round of the draft! (Many like to remind nay-sayers however that Tom Brady was a 6th round selection. Bills fans, though they may not much care for Brady, would love to see a similar outcome for their final-round pick.)

Gailey has already stated that Brown will be allowed to compete for the starting QB position along with the three incumbents from last season. Should be an interesting competition this offseason.

Lastly, the Bills drafted an OT whom I have read they intend to move to guard. Calloway may or may not make the team—the Bills drafted two (starting) guards in the 2009 draft—but it was good to see that six of their nine picks went toward linemen, offensive and defensive. (Due to his size, 6’7″ 323 lbs, I’m not sure about that move to guard. So perhaps he will compete more at the RT spot.)

Conclusion
The Bills did not select the players that anyone expected them too. Not even Spiller, whom some are calling the “best player in the 2010 draft.” However, they really did address all of the positions that they needed to. If the guys they got—whom they say are all guys they had targeted—turn out to be viable NFL players, well, then they did an excellent job!

But, that’s the thing. That’s the part we don’t know for a couple of years.

There’s some who think Spiller could be in the running for Rookie of the Year, based on his talents and work ethic, but of course you can’t really predict such a thing. If that’s the case however, then the Bills definitely already improved their team.

Overall, seems like a great job by the Bills! (How often do we Bills fans get to say that???)