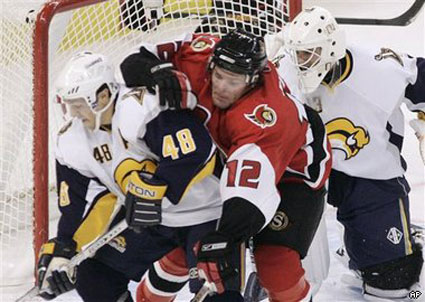 Right now, that’s a good thing. Yes, I know… our football team lost 40-7 in Chicago last week, but really, they’re a lot better than that – for the first time in a long time. They really could very easily be (by the way they have played) 4-1 right now. That’s perty good.

But even with as much promise as our Buffalo Bills are showing… right now the real team to watch in Buffalo is the Sabres!

Not sure what I think about the new logo and color scheme for the Sabes, but man are they an amazing team. So far this year they are 3-0 (yes I know there are 80 games left still) and they have beaten some great teams. The two games we got to see you could just tell that they were the better team on the ice.

We’ve never had “the best team in the league” in Buffalo, but perhaps this year we do?

The Bills that went to four straight Super Bowls might come close to that, but most would argue that since they never won the SB, they can’t be called “the best” team in the league.

Well, regardless… it’s a pretty fun time to be a Buffalo sports fan!

If you’re interested, check out my Bills Blog when you get a chance. It’s the page I keep on the BuffaloBills.com site.