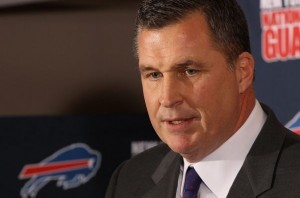 Today is Football Day in America. Actually, around most of the entire globe. People everywhere are excited about “The Big Game” played on this first Sunday of February. The best two teams in the NFL—perhaps the greatest sports league in the world—clash in a winner-takes-all contest for ultimate supremacy!

But I’m thinking about the draft, and free agency, and our new coaching staff.

Yes, that is the life of many Bills fans. Our season ends as the clock hits 00:00 in week seventeen of the regular season (but really, it feels like it ends somewhere around Thanksgiving).

Ah, the life of a Bills fan!

But, it’s not all sunshine and lollypops. (Wait…)

While everyone else is talking about Ray Lewis using deer antler spray or the Brother Bowl (Alex calls it the SuperBaugh) … we are discussing the Bills becoming Syracuse West, the Senior Bowl, which QB will be the best fit, and free agent and/or trade possibilities.

And since we’re in football mode… let’s look at some of the reasons for hope here in Buffalo. (I know… I can always find those. But really, read on!)

And maybe a brain transplant? A lot has changed at One Bills Drive, and also, not a lot.

The players are all the same. Even Ryan Fitzpatrick has not yet been dethroned. He remains the Bills top QB, though there is rampant speculation about who might supplant him next season. (Will cover that below.) The two-headed RB monster should remain in place in the Bills’ backfield. Stevie Johnson is still Stevie Johnson. The Bills are (as far as I know) trying to re-sign solid left guard Andy Levitre and Pro Bowl safety, Jairus Byrd. Much of the on-field Bills will look the same.

However, starting at the very top, the Bills are markedly different.

First, Bills owner Ralph Wilson—a nonagenarian beloved by the city and the league—has for the first time in his 50-plus years of owning this franchise, ceded control to another person: Russ Brandon. That is truly a remarkable change. A few years ago, Russ had some fancy title, and acted as the General Manager of the team (though I believe there was a more football-minded “sidekick” with equal or more football-related decision making power) … that didn’t work out that well, so they gave him a different fancy title, and brought in Buddy Nix as a true NFL GM. All the while, Ralph Wilson, by all accounts, had daily contact and directives for the team and administrative staff. (Though, he was no Al Davis.)

Well, Brandon has done a fine job with the organization in all areas (he’s a savvy business man and marketing guru to be sure) and so, Mr. Wilson decided it was time for him to “retire” more officially, and he has now granted full control of the Bills organization to Russ Brandon.

Once that was in place, the younger, more decisive Brandon wasted no time.

Chan Gailey and his entire coaching staff were fired. They decided to keep Buddy Nix, but I think they re-titled him also. A few other guys were moved around, and then within six days of the start of their search for a head coach, the Bills chose the man you see at the top of this article: Doug Marrone.

The Bills have done it again! They could have hired someone with a reputation, a record, or at least a recognizeable name! Instead, we get a no-name, never-head-coached-in-the-NFL yahoo … sheesh!

Well, you see… it actually feels quite different this time.

This time… the Bills interviewed the guys with the big names. (Including Chip Kelly, whom everyone seemed to be gaga over.) And guys like former Bears HC, Lovie Smith, were publicly stating that they wanted to be the Bills choice for head coach.

The same was true with their eventual choice, Marrone. Apparently the Bills were one of four teams vying for Marrone’s head coaching services. And he chose Buffalo.

It makes some sense that the Bills had an edge. (He has a relationship with the Bills administrative guys, he’s lived in NY for a while now, as head coach of Syracuse, just a couple hours away, and a few other such intangibles.) But truly, that a sought-after head coaching candidate would choose Buffalo over other teams… that says something.

And very shortly thereafter, Marrone began putting his staff together, including bringing in the Jets former Defensive Coordinator, Mike Pettine. One thing the Jets have had over the past several seasons is a good defense. So that hire is certainly promising.

Lastly, the new coaching and higher-ups staff for the Buffalo Bills is young! Some are really young, like Offensive Coordinator, Nathaniel Hackett. He was the offensive quality control coach (or something like that) a few years ago here in Buffalo, but now, at age 33, he’ll be heading up the offense featuring up-and-coming NFL stars such as Stevie Johnson and C. J. Spiller.

Truly, it may not be as visible on the field on Sundays, but this Bills team has had some impressive upheaval in the off-season so far. It seems like that can’t help but produce change.

The biggest question for the Bills now is their QB. Ryan Fitzpatrick had a tremendous start to the 2011 season, taking the team to a 5-2 record before being cracked in half by former Bills LB, London Fletcher. After that, he was never the same. Including pretty much all of last season.

Fitz has guts. He’s perhaps the toughest QB in the NFL. (Maybe Roethlisberger could challenge for that title.) He’s fearless, and has a pretty strong arm, actually. He can really zip the ball into tight spots. He’s also highly inaccurate, or, can be? Not sure how to say it. Maybe 40% of his throws are off-target? Yikes. That just can’t pass for an NFL starter, no matter how many other intangibles he might have.

So the hunt is on for a new starting QB option.

Will it be the draft? Not sure. They will definitely draft at least one quarterback in this year’s draft. However, most reports suggest that there may not be a true first-round talent in the draft. So do the Bills take a chance on a guy with the 8th overall pick? Or do they draft a big lineman at that spot and either trade back up or hope their QB guy falls to their pick in the second round? I’m really not sure. They attended the Senior Bowl and the reports I hear favor Tyler Wilson from Arkansas from that group of six QBs. Of course there is speculation that Syracuse QB Ryan Nassib would be selected by this new Bills coaching staff that features eight coaches from last year’s Syracuse staff! But, again, Nassib is certainly not worth the 8th overall pick … could be be available for the Bills’ third- or fourth-round picks? We shall see.

So what about free agency? Technically, Super Bowl QB, Joe Flacco, is not under contract following this season. You think the Bills might go after him? Um… do you think the Ravens would EVER let him go after this year’s playoffs? Never.

So what other options are there? There is certainly the possibility of a trade. Alex Smith is one rumored option, as well as Seattle’s now-backup, Matt Flynn. Do the Bills want a guy like that? Or should they just put everything on a rookie that they select? Recent history has shown that rookies are certainly capable of great things in the NFL. (This year alone: Andrew Luck, Robert Griffin III, and Russell Wilson had great success.)

Whichever route they go, the Bills will almost definitely have a new guy under center in September of 2013. My hunch is that they will get their guy through the draft. (That seems to be Nix’s M.O.) It will be very interesting to see who that guy ends up being!

There really are reasons to be optimistic as a Bills fan. Let me list a few, bullet-point style:

In short, we’re in off-season mode already here in Buffalo and so far it’s been at least interesting, if not downright impressive.

New coach, new attitude, new coaching staff, new decision making at the top … add a handful of new key players via draft and free agency … the Bills really should be in contention for at the very least the playoffs this next season, if not winning in the playoffs.

Don’t forget the ancillary things that have already happened here. The Bills signed a new stadium lease (10 years, I believe) and a new 5-year deal with Toronto. (That is a sore subject with many Bills fans, but it does increase the potential fan base, as well as simply bring cash to a team that doesn’t make as much as other teams.)

They certainly are busy. You can’t deny that.

And for the most part, the moves seem to be positive, aggressive, and hopefully will finally lead to the Bills being a winning, respectable franchise in the NFL again?

That would be impressive.

(My 14-year-old and 11-year-old NFL fan sons don’t know a Bills team other than the joke that they’ve been for all of their lives. How sad! The Bills went to FOUR straight Super Bowls when I first became a fan of theirs. THAT is what I hope they get to see from their team again some day… soon? We’ll see)

[…] now, the Buffalo Bills, who cleaned house at the end of the last season, are potentially not going to draft a quarterback in the first couple […]

[…] may have read here before that the Bills are nearly completely different from the very top (Russ Brandon is now in charge of the Bills world) on down. All of the coaching […]