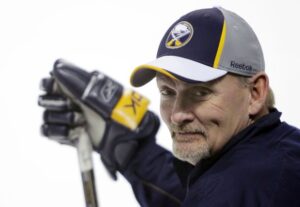 The Buffalo Sabres announced today that they have “relieved Lindy Ruff of his coaching duties”.

It’s been asked for, begged for, longed for, pined for, and even fully expected for a few seasons now. Sabres fans (and players?) have felt the need for change due to the teams year after year being appropriately labeled “Underachievers”.

Prior to today’s announcement, Ruff had been the second-longest tenured coach in American pro sports. Now the silver medal would currently go to Barry Trotz of the Nashville Predators. (This could be the proverbial writing on the wall for Mr. Trotz…)

I actually remember the day, as a long-time Sabres fan, when the team went through coaches as fast as their Buffalo pro-sports counterpart have in the last decade and a half, or so. Rick Dudley, John Muckler, Ted Nolan… all fine coaches, actually. But they all only lasted a few years, then they were “let go”. 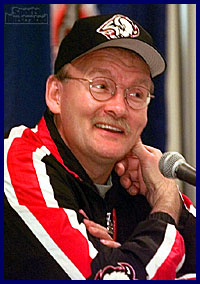 But not Ruff. His record at his departure: 571-432-162. That’s one thousand, one hundred and sixty-five games. That, folks, is rather impressive. Even if you’re not a fan of his coaching of late (or ever) you’d have to give at least a slight tip of the hat to his incredible longevity. (And a winning percentage of .560 over that span, as well.)

Only three coaches in NHL history have coached more than a thousand games with the same team.

The Sabres have replaced Ruff with Ron Rolston, who was the head coach for their farm club, the Rochester Americans, up until about 5pm ET today.

And thus begins a new era.

I’m not really sure what to expect. I am an eternal optimist, and even I have been saying for a few weeks now, “I guess it’s time they fire Ruff!” The players have been lackluster (by many accounts) in several of their games this season. The 2013 season began well, with two straight wins, but since then the Sabres are 4-10-1.

Some of their wins have been fantastic. A 7-4 win in Boston, scoring four goals in the third, and overcoming a 3-1 second-period deficit as well. They’ve even looked pretty good in at least a couple of the losses: this past Sunday 4-3 to Pittsburgh, and a loss to the Ottawa Senators by the same score a couple weeks prior.

Were the players purposely not playing their best or their hardest to force management’s hand? Did they hope to see Ruff’s tenure severed?

No one can know that but the players.

We will now test that theory beginning tomorrow. The Rolston era will begin in Buffalo.

I look forward to seeing a new and different Sabres team. It can only get better, right?

And I wish the man, Lindy Ruff, who has lived for a while now in one of my home towns (Clarence, NY) only the best. Whether he coaches somewhere else or not—the affirmative being most likely—he will be forever admired and loved by the Buffalo community.

And now he’s gone. May he rest in peace.

2 replies on “End Of The Lindy Line”

[…] apathy) that they have displayed thus far was actually sufficient to cause the organization to fire their coach of sixteen years. (Which, honestly, even though it happens all the time in the league, many people in Buffalo […]

[…] that the Sabres will look pretty different in the 2013/2014 season. That began last year with the firing of Lindy Ruff, whom some figured to be the Sabres coach until he wanted to leave. Add to that the past two […]