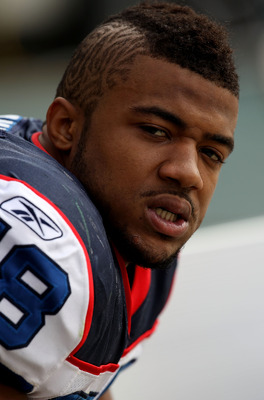 The Buffalo Sabres got their first win in five tries last night. It came by way of a(nother) great performance by goalie Ryan Miller. They have seven wins in this lockout-shortened season. Strangely, they are currently the worst team in the Eastern Conference, and yet they are only four points out of the final playoff spot.

The level of ineptitude (and apparent apathy) that they have displayed thus far was actually sufficient to cause the organization to fire their coach of sixteen years. (Which, honestly, even though it happens all the time in the league, many people in Buffalo figured it would never happen here!)

And now, the Buffalo Bills, who cleaned house at the end of the last season, are potentially not going to draft a quarterback in the first couple rounds?

Are we ever going to see a championship team here in Buffalo?

They really have come close. Obviously the Bills in the late 1980s to mid-1990s, a Ronnie Harmon catch away from six straight AFC Championship games. SIX, people! And the four straight Super Bowl appearances will likely never be rivaled. And, the Hall of Fame inductees from that team keep coming.

The Sabres have a couple Stanley Cup Finals appearances to their credit. (But no Cup…) They have a President’s Trophy (first place in the league for the regular season) and that team had some really notable names… but they are all gone.

Now names like Tyler Myers, and Tyler Ennis, and Stafford, Foligno, Enroth, Grigorenko, Brennan, McNabb, Adam, and on and on, are leaving a bad taste in the mouths of Buffalo sports fans everywhere.

Why can we never catch a break?

Free Agency is coming up for the Buffalo Bills. It begins on March 12th. The draft follows that in late April. The NHL trade deadline is much later than usual this year (because of the shorter season) at April 3rd. The Sabres’ deal makers have repeatedly stated that they are interested in making moves, “but we need to have a partner. It’s not like XBox.”

Since late last year, the Bills have said they want to draft a top-notch QB.

But since the new coaching staff has come in, they have been releasing (or not re-signing) veteran players at an alarming rate. This leads one to believe that they will use the draft to fill those holes. (Oh, and they also re-signed QB Tarvaris Jackson, and “reinstated” QB Ryan Fitzpatrick by publicly announcing that he and Jackson will compete for the starting job.)

With so many “new” holes, and making that move at quarterback (along with what most who follow the draft say is a “weak” class of QBs) does that mean that the Bills won’t draft a QB in the first couple rounds??

It may not even matter.

Unfortunately, the Bills’ recent track record with the draft goes something like this:

No QBs. And not a great list overall, though there are some good players there. (Even a couple Pro Bowlers in Byrd and Spiller.)

It’s a bit unfair to come to any real conclusions regarding last year’s draft (though, it does seem they did get a very solid player with the pick of Gilmore), and one must also consider that there were two different “regimes” overseeing those drafts (Jauron/Levy, Jauron/I forget, and then Nix/Gailey).

But the italicized players are no longer with the team, and in some cases, no longer in the NFL. These are guys picked in the top three rounds.

C.J. Spiller is going to be great. And there’s no way that BOTH Byrd and Levitre leave Buffalo (they just are not currently signed). But the rest…

It sure seems like perpetual, eternal sports doom for this city. For both of the major pro sports franchises.

I do find myself hoping that the bottom really falls out for the Sabres. From what I’ve read, there are three really good prospects in the 2013 NHL Draft. So, if we add one of those guys to some promising young players already part of the organization at some level … seems good, no?

But then you remember the whole Buffalo thing.

“Tarvaris Jackson throws it deep to T.J. Graham… he’s got his man beat! … OH! He drops the ball and the game is over! I don’t know why they didn’t give the ball to Spiller a whole lot more than they did in that game, do you, Mark?”

“Tyler Ennis makes a move to get around Chara… a beautiful pass across to Myers… OH! He fanned on it! But the Sabres get it back again, Leopold around behind the net… out in front to Foligno…. OH! He fired it badly wide of the open net! Rask was completely out of position, but he fired it WAY wide!”

Yep. Seems to be the way it shall forever be…