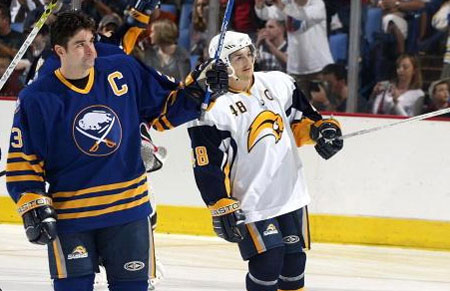 As you most likely know by now, Chris Drury and Daniel Briere have moved on from the Buffalo Sabres to $$$Greener Pastures$$$. They were signed by two different teams (Rangers and Flyers) for a combined $84 million!!! Holy cow, that’s a lot of moola! The Sabres were unable and/or unwilling to match that, and in the case of Drury, he just chose to go to the Rangers (they were his favorite childhood team) instead of stay in Buffalo (who would have matched the Rangers’ offer.

So, good for those guys… at least financially. But this brings up yet again the sad state of sports with free agency and salary caps. There are many factors, and I really don’t want to get into it here, but I do want to say that I am not a fan of free agency.

I understand that it is very cool for the player. They get more money for sure, they also get the chance to determine where they will play (like Drury). But both Drury and Briere were captains on the President Trophy winning Sabres (for the best record in hockey) and they left that behind (understandably, in many ways) to pursue their goals. Not those of the team.

Does any player care about the game, or the team, or the city anymore? Perhaps that is unfair. Both of these guys said they would like to stay in Buffalo. Particularly Briere. But in the end, he was offered $25 million over 5 years by the Sabres, and the Flyers offered him $52 million over 7 years.

Yeah, I would too.

I think. Part of me says I wouldn’t. I would take the “paltry” $25M and stay with the team that I had helped build. I would not move the family and start over again… I would be OK with $25 MILLION DOLLARS. But, why take $25M when you can double it?!? So crazy.

It’s sad that this is hurting sports in so many ways. Small market teams are unable to keep up as they can not charge as much for tickets, and don’t have other sources of revenue to keep up with the larger salary caps. It’s also just raising the price of tickets in general across all the sports leagues. Many sports writers are prediciting we’ll just be seeing another lock out in the not-too-distant future if the NHL continues this way.

What if players decided they love the game, and love to win, and build a championship team. What if teams fairly compensated those players who made a commitment to stay with one team for their careers? We will likely never see a team that can repeat what the Bills did from 1990-1993, going to four straight Super Bowls … mostly due to free agency.

It might sound like sour grapes, but even before we lost Drury, Briere, and even Zubrus a couple days later, I was not a fan of free agency. Maybe it’s because my team is one of those “small market teams”, but I think it’s cause I love the idea of buildinig a team of guys you know and can root for for at least a good chunk of their careers. Now when you buy a jersey (like, #23 or #48) it’s obsolete in 3 years or less.

The Sabres did manage to hold on to Thomas Vanek last week, matching an offer that came in from Edmonton. They were not going to lose another one! Good for them.

I read a great article on this at NHL.com today. Check it out if you’ve got time.

The Sabres will go on. As will the Bills, and every other team. It’s the path that pro sports have chosen. I do wish there was some happy medium where players could be happy, not at the expense of the team, city, fans, owner… and vice versa. I don’t think we’ve found that just yet.