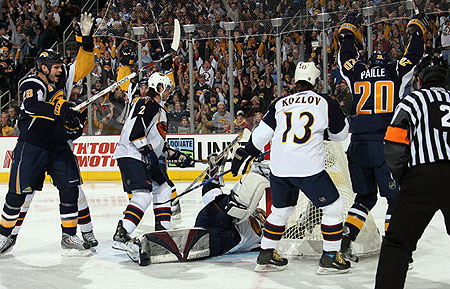 Last night Jen and I played a new card game called Tunge. (Not sure how you pronounce it.) She discovered it on a blog she reads and wanted to play it with me. I’m always game for a new … game. 🙂

So, we figured it out pretty easily and had a good time playing. Mostly. That is until I noticed that this game – as with many card games – is almost entirely won by luck. You just have to get the right card. “By the luck of the draw.” Those aren’t my favorite kind of games. I like knowing that I won (and you lost) because of my skill and cunning and craftiness.

But what all that reminded me of was my Buffalo Sabres.

See, this year, the Sabres – who last year finished the season with the best overall record – are not doing as well. At a quick glance, you might even think they were bad. I don’t remember if they were ever officially last in their conference… but they were at least second to last. (That in itself is deceiving as they were still only 6 or 8 points or so out of a playoff spot.) Most people do assume that the Sabres are just a shell of their former selves, losing their two captains from last seaons, Chris Drury and Daniel Briere.

It’s true that they miss the leadership and production of those two guys, but it’s not true that they are as bad as their record would indicate. Hockey is certainly a game of skill, on many levels. But it also involves a good bit of luck.

The bounces have not gone the Sabres’ way this year. They have outshot teams many a night, and come up losing by a goal. The goalie has made incredible save after incredible save, only to have a puck bounce off the boards behind him and either into the net, or right to the lucky opponent standing near the crease to cash in. Goal posts have rung, goals have been disallowed, injury after injury after injury have plagued this once-feared team.

We do not have cable this year, and so have only kept up with the team via radio (over the internet) and reading at sabres.com and NHL.com. We have also caught the occasional Sabres game on Versus.com. But from everything I have seen, this team is still very good. Very young, but very good.

I try and catch the post game interview with Lindy Ruff after every game. (Subscribe to the podcast at iTunes.) I like to hear what he’s got to say. He’s seen this team be the best, and now struggle through a year of seeming mediocrity. When things are bad, he says it. This year he has not said it. Almost every night he has nothing but positive things to say about the players and their effort and the chances they have created. He usually says something like, “It just didn’t bounce our way.” That has been my observation as well. The Sabres have just as much fight in them, just as much skill (though, more injuries to be sure) but they do not have as much “success”.

It will come. Luck works both ways. At least over the course of a whole season. The Sabres are coming out of a horrendous stretch of two wins in fourteen games. They have won three games in a row, looking for four tonight in Atlanta, where they play a Thrasher team that is tied with them in the conference standings.

Perhaps this small streak is the beginning of things starting to go our way. Maybe the Sabres will be on the more fortunate end of bounces, calls, injuries, etc.

One reply on “Luck”

I got spoiled last year. Living in Philly, I get a real healthy dose of the Flyers. Last year at least I got some of the Sabres because they were white hot. I’ve seen one game this year. I have to keep track like you do. It seems they are going to be good again real soon, but it hurts to know that we lost both Briere and Drury. Apparently you need to double everyone elses offer to get anyone to consider being in Buffalo.

Don’t they know about all the wing joints?