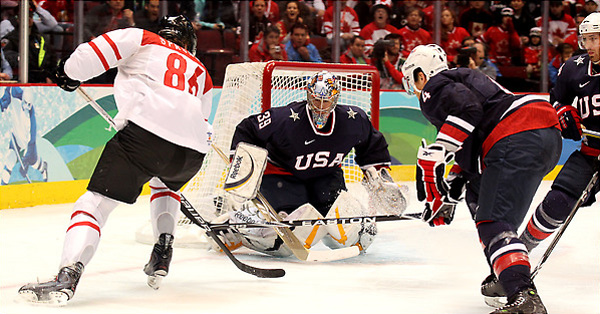 Team USA, on the strength of Ryan Miller’s shut out, and Zach Parise’s two goals, advanced to the Olympic “final four” yesterday. It was a fantastic day of hockey! The Canadian team looked super impressive, beating up on the Russians, 7-3… but making it look even easier than that. (And Russia is loaded with NHL all-stars!) Actually, all of the teams—not just the Russians—are loaded with NHL all-stars.

(Except for the United States team. Fascinating.)

Team USA has had superb goal tending—much like the Buffalo Sabres—and are the only undefeated team left in the tournament. They are also “scrappy” and physical, and they just play like they won’t accept losing. Aside from the Canadian players, it was interesting to see the “personalities” of each nation’s players. The United States players are as I described above. Mostly second and third-line players who are the “heart and soul”, the “grit” of their teams. You can’t win without them. (But usually, you can’t win if they are your whole team… So, we do have Patrick Kane and even Zach Parise, who are more “skilled players” and natural scorers.)

Then there is the Russian team. If you look at their roster, it’s just staggering how much fire power they have. Alexander Ovechkin is the leagues top goal scorer. And right behind him—sometimes in front of him—is Evgeni Malkin, and right behind them in the scoring column is Ilya Kovalchuk. All three are members of the Russian team, along with a handful of other amazing, all-star players.

But what I noticed about these guys was, they almost looked inept. They were definitely not the offensive machines that they are each night in the NHL. Yes, Canada had a good defensive scheme and some pretty talented defensemen (and a talented goalie) but, they face that from most teams in the NHL.

What they were missing was their teammates.

They needed the guys who are on Team USA. The grit guys. They needed the guys on Team Canada, the guys who set up their scoring. They need the skill and experience of the Fins and Swedes… the savvy veterans who set up their amazing scoring plays. Sadly, even their goalies (who are equally amazing) just looked silly, as all these highly skilled scorer try to play defense in front of them.

I just found it really intriguing to see how a country could have a hockey “personality.”

It’s certainly why the Russians lost. For the most part, every NHL team would want any of those top 6 or 7 guys on the Russian’s team… but with a few guys sprinkled in to help them thrive.

The four remaining teams seem to have a bit better balance. (Though, as I mentioned, Team USA is the most unbalanced, with hardly a “star” player on the roster.)

Really fun hockey being played these days. The semifinals are tomorrow. USA vs Finland, and surprising (but talented) Slovokia vs the homeland favorite, Canada. A rematch of USA vs Canada (which team USA won 4-3) would be a fantastic Gold Medal game … but all four of the remaining games should be fantastic. Can’t wait!