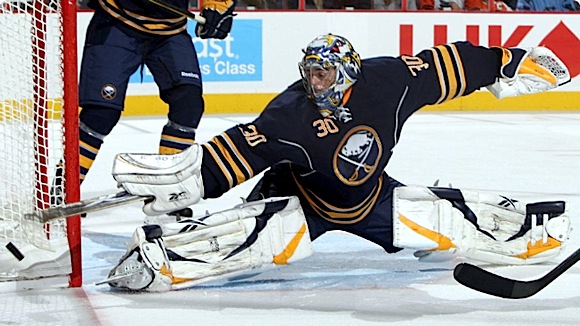 It’s really unbelievable when in the world of professional sports, one team can totally dominate another, game after game, season after season.

Unless you are a fan of a Buffalo pro sports team.

No, I am not speaking of the incredible streak that the New England Patriots are still enjoying against our Buffalo Bills… though that is a pretty frustrating one for we Buffalo fans. Tonight I’m befuddled by the way the blue and gold managed to post another ‘L’ in the standings after sixty minutes versus their current (and long-time) nemesis: the Ottawa Senators.

The Sens have won 8 straight against the Sabres, and their dominance has extended to the post season in recent years, with their last meeting being a win in only five games against the President Trophy winning Sabres of 2006-2007. (I believe that was the highest point total in Sabres’ history that year.)

From what we’ve heard, it was a hard-fought game. They got the first two goals, then the Sabres scored two goals in 27 seconds to tie it up … then the Sens scored in the last minute of the game to get the win, 4-2. (Empty netter added at the end.)

Oh, I forgot to mention… all four goals were scored by Daniel Alfredsson and Jason Spezza, each with two. (All that was missing was two more from Dany Heatley, who now plays for San Jose.) Those two continued their strange dominance of the Sabres.

The Sabres are really having a very good season. They have a great goalie, who is having a good year. They have just enough scoring from the right players (but could certainly use more…) And for a while they had quite a lead in their division.

They just better hope that they don’t face the Senators in round one of the playoffs.