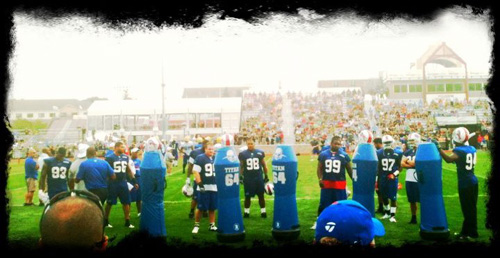 Yes, fans, football season is upon us!

Tonight the Bills will take the field for the first of four “warm up” games. This evening they play the Washington Redskins at home. (That means that we get to watch it one day later, since we will not be at the game!) If you are a fan of our team, you’ll recall that our quite-sorry defense put on a 10-sack, shut-out performance against this opponent last year! Wow!

Don’t expect a shutout tonight. (Even with a vastly improved defense!) In fact, don’t really expect to learn anything from the score, win or lose.

Preseason games are weird. It’s really not about the game plan, or the scoring, or anything that might matter in a regular NFL game. It’s more about seeing mostly the backup players in “game conditions”. You want to see who should fall where on the roster once the season begins. It’s about “getting into football shape” (readjusting to the quickness of real football, actually hitting people, stuff like that).

So, rather than discuss tonight’s game here, I thought I’d give me somewhat regular, somewhat annual preview of the upcoming Buffalo Bills season!

Believe it or not, there are many. (And those aren’t just Bills-colored glasses!) But, check the reasons for pessimism that follow for the “reality check”.

So the good thing about 2012, I’m the opinion of this very long-time Bills fan, is that there really do appear to be more reasons for optimism than pessimism.

Tonight begins the proving of that.